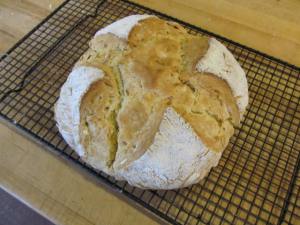 The Green month of March! Saint Patrick’s Parades in Boston, New York City, and across the whole Country; Guinness,  soda bread and thousands of people claiming Irish heritage and those wishing they could claim Irish heritage; Irish music, Irish pubs, people wearing outlandish clothes studded with every shade of green; leprechauns, green dye(sacrilege)  in (Harp’s) beer, a day for memories, heritage, feasting and for quaffing eternal amounts of Guinness and Johnny Jameson; a day for solidarity by hanging out at the Ancient Order of Hibernians, an Irish pub or your home with your loving family and friends; cooking a meal (American Irish classic corned beef and cabbage) that will honor our ancestors, acknowledge where they came from and why they came to the United States. This is what we do at the Qualters home.  It is a joyful day renewing our Irish heritage and passing it on.

Over the years our menus on St.Patrick’s Day over the years have included the following menu items and are always present on our table.

At the top of our menu there is the incomparable and truly Irish, Soda Bread. In discussing Irish food with anyone, there is no mystery to the words, soda bread. Everyone knows it’s from Ireland.  A “word or two” about Irish soda bread, obviously, our Irish ancestors, dating back to the Bronze Age and even earlier, made bread, unleavened as it was, hard to chew as you can well imagine. By the 7th century we have records that bram, (a yeast from fermented malt, I believe a product resulting from the making of beer) was being used to leaven (unpredictable at best) bread. In the early 1820s the Irish began to use sodium carbonate produced by an American company. The first published recipe for soda bread(1836) was found a few years ago in a newspaper from County Down, Ireland. The recipe contained four (4) ingredients: salt, flour, buttermilk or sour milk and sodium carbonate, baking soda. And, as they say, the rest is history.

The recipes below with a short history are for your Irish recipe box and for delighting your family and friends on Saint Patrick’s Day: Black Pudding, Colcannon, Bailey’s Irish Cream Cheesecake and the Brown Bread recipe from the famous Ballymaloe Cooking School, Shanagarry, County Cork, Ireland. Cooking Irish!

Happy Saint Patrick’s Day! It’s your heritage, pass it on!

According to Colman Andrews, author of the superb cookbook, Country Cooking of Ireland, the earliest breads of Ireland were probably made from crushed grains such as; barley, rye, oats and wheat cooked on hot stones. I believe they would have been extremely dense, dry and definitely to the tooth, somewhat flat with some lift to them caused by what was called bram, foam left from the brewing of ale and cider. This bram appears to be the ancestor of brewers yeast. This method and style of making bread in Ireland lasted for centuries until the commercial production of yeast (early 20th century) and the introduction of bicarbonate of soda (early 19th century) became the norm for leavening bread in Ireland.

Tradition has credited Sir Walter Raleigh with bringing the potato to Ireland in 1587. Stories abound he actually brought the potato from Virginia, and while stopping off in Ireland, potatoes were left, planted and the rest is history! And the history of the potato in Ireland is fraught with terrible famines, the worst of the worst in 1845. It lasted for six years, killing over a million men, women and children while causing another million to immigrate to other countries. Today, we honor our ancestors by cooking their most treasured potato dish, Colcannon, traditionally made with kale and enhanced with scallions (green onions), beaten fluffy and laced with melted butter and whole milk.

Black pudding has been part of the Irish diet for centuries. This ancient food originally became part of the peasant’s diet in their attempt to use every part of the animal. The Irish began to eat it during medieval times when wasting any food was out of the question. Blood pudding today can be found in food cultures throughout the world. Black pudding recipes contain either dried pigs or beef blood, containing any or all of the following products (barley, breadcrumbs, oatmeal, pork, onion, black pepper, herbs, and spices) mentioned here.  In Ireland, there are more than half a dozen producers of black pudding. Here in the US there many producers. Obviously not all the puddings taste the same. The one we use is Donnelly’s which is made in the US using Irish spices. I believe it is one of the best.

History/Tradition/Observations
Baileys is the perfect marriage of fresh, premium quality Irish dairy cream, finest spirits, Irish whiskey and a proprietary recipe of chocolate flavors. The raw ingredients are sourced from the island of Ireland. It is gluten free, contains no eggs or egg products. It is basically lactose free with a trace amount of 0.05%. There are no nuts or nut products in the manufacture of Baileys.  Baileys has a shelf life of 2 plus years as long as it doesn’t come in contact with direct sunlight. The key to the shelf life of Baileys is the patented process of blending the fresh cream with the whiskey without use of preservatives. The alcohol acts as a natural preservative for the product. The Baileys cheesecake we will make this evening is an unbaked cake containing no gelatin. What holds it together is the high chocolate content that sets the cake perfectly?

This recipe is adapted from, The Complete Irish Pub Cookbook, The best of traditional and contemporary Irish cooking, p.150, Parragon Books, 2012.