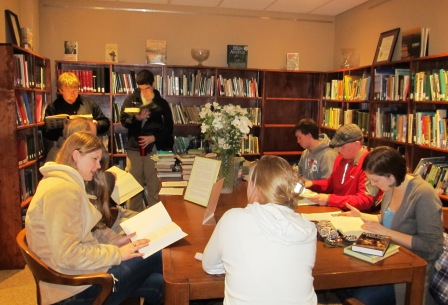 The Museum’s Paul O’Dwyer Library is named for, and endowed by the family of, the “great champion of the common man” (New York Times).  Born June 29, 1907, in the village of Bohola, County Mayo, in western Ireland, Peter Paul O’Dwyer was the 11th and last child of Patrick and Bridget McNicholas O’Dwyer.  Upon completing his schooling in Ireland, the young man Paul O’Dwyer would join his older brothers in a journey to America to find work.  Once in New York City, he landed a laborer’s job but pursued studies at Fordham University, earned his law degree at St. John’s University, and was admitted to the New York State Bar even before he was eligible for American citizenship – a testament to his fiercely Irish inner drive.

With his legal eminence growing, he dedicated his life to a public service career that eventually spanned six decades.  Paul O’Dwyer would gain an international reputation as an advocate for the common man and woman, with the New York Times declaring him America’s “…liberal battler for underdogs and outsiders.”  He ran for elective office many times, including as the Democratic candidate for the United States Senate from New York State in 1968, and was elected New York City Council President in 1973.

Paul O’Dwyer began his long distinguished career in the 1940s as a champion not only for the labor movement – he defended Kentucky coal miners among many, many other working men and women – but also for embattled immigrants, women, and minorities; he fought against McCarthyism and racial segregation in the 50s – being among the first volunteers litigating in Deep South integration struggles, and he was a major public figure against the Vietnam War in the 60s.  He won a landmark 1951 legal case against the powerful Metropolitan Life Insurance Company that opened the way for blacks to live in Stuyvesant Town, a huge Manhattan housing complex, and presaged an era of desegregation across the nation.

Paul O’Dwyer’s life-long commitment to his native Ireland was highlighted by two signature accomplishments: his service as the national coordinator for the American League for an Undivided Ireland, and his endowment of a home for the handicapped on his family home site in Ireland.

The Irish American Heritage Museum’s Paul O’Dwyer Library contains a number of this world-renowned Irishman’s papers and books, as well as hundreds of volumes related to Irish history, culture and customs donated by other individuals.  It is made possible by the generous support of his family, including his children William, Rory, Brian, and Eileen, and The Mayo Foundation in Ireland.

The O’Dwyer Library supports the mission of the Irish American Heritage Museum by building a collection focused on the story of the Irish experience in America and Irish history and culture.  The Library collects, preserves, provides access to, and facilitates research use of materials within this scope.  The collection, consisting primarily of print materials, is particularly strong in the areas of the Irish American experience, Irish history, Irish literature and literary criticism, Irish American literature, Irish culture, and research materials supporting genealogical research.   It has been designated by the National Board of the Ancient Order of Hibernians as a repository of the National AOH’s history: the O’Dwyer Library includes microfilm and printed copies dating back to the early part of the 20th century of the Hibernian Digest and Proceedings from the National AOH Conventions.

The Paul O’Dwyer Library is open to researchers and visitors during the Museum’s public hours and by appointment.  While the Museum staff is unable to loan books directly to visitors, books can be borrowed through anyone’s local library.  The Museum received in 2016 a grant through the Capital District Library Council to digitalize its Card Catalogue, making it easier to borrow titles from the O’Dwyer Library through one’s own local library through the Capital District Library Council’s Interlibrary Loan Program.

Within the collection guidelines, however, monetary and material donations are welcomed as the chief means of developing the collection.  They are acknowledged in writing whenever the donor is known.  Material gifts are evaluated for relevance to the collection.  Those items not needed for the library, or for which the library is not suited, may be declined at the discretion of Museum staff, or if left with the Museum may be sold to raise funds or otherwise disposed of.  The Museum does not accept material gifts with restrictions on their use or disposal.  If a large material gift is planned, a list of materials compiled by the donor should be first sent to Museum staff.  It is the responsibility of the donor to assess the value of his/her donation for tax purposes.  The Museum staff welcomes questions concerning proposed donations.