Brian Manley was 83 in June 2016, but memories of his young life in Ireland are perhaps more vivid than the traffic outside his Western Avenue home in Albany. He was born on the north side of Cork City in 1933, the middle child of five children of Daniel Manley and Annie Fitzgibbon. Brian grew up in a Republican household where memories of Terence McSweeney and Tomas MacCurtain lingered. Almost everyone in his Blarney St. neighborhood had been in the IRA during the War of Independence and remembered the burning of Cork in December 1920. It was Brian’s mother who told him the stories about his family’s involvement in the revolutionary years. 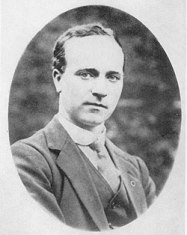 Brian’s father was born in 1900 in Clogheen, a small town on the Blarney Road north of Cork City. Brian is not sure when he moved into the city, but by age 16, Dan Manley was a message runner for the Irish Volunteers in the build up to 1916. Although Dan never talked about his part in the War of Independence itself, his actions earned him a 1917-1921 Service Medal issued by the Irish Government in 1942 and a certificate of Meritorious Service for his time in the Cork Brigade, the very brigade led by Tomas MacCurtain until his death in 1920. Dan Manley’s certificate places him in C Company of the 1st Battalion of the Cork Brigade and was signed by Tomas Crofts and Mick Murphy, both commanding officers of the 1st Battalion.

The 1st Battalion suffered tragic losses in the 1921 Clogheen Ambush, a tragedy that touched the lives of both Dan and Brian. Six IRA men from the 1st Battalion were massacred in a safe house barn in Clogheen by the British army. This was in Dan’s townland and the losses were from his battalion. The six men shot were all from the Blarney St. area, a stone’s throw from where Brian grew up. Family memories of the deaths were part of the fabric of the neighborhood for generations. 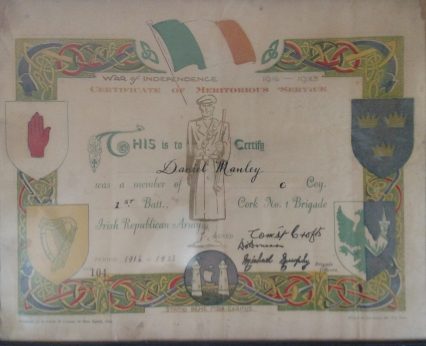 The 1st Battalion was also involved in a much lauded mission during the cease fire of the War of Independence. A witness account from the collection of oral histories about the revolutionary years in the Irish Bureau of Military History offers a riveting account of an operation that C Company was involved in in 1922. One member of C Company who had a job in the Royal Navy Dockyard on Haulbowline Island in Cork Harbour heard of a ship leaving the harbor loaded with arms. A commander of the 1st Battalion, Daniel O’Donovan, led an operation to hijack a tug boat in the harbor, overtake the ship, and claim the arms. The operation was successfully executed on the afternoon of March 29 into the morning hours of March 30. The Cork Brigade organized 76 lorries, 5 steam wagons, and 500 men along a stretch of the Cork coastline within a couple of hours to meet the commandeered tug “Warrior” and ship “Upnor.” By 1:30am, both boats were berthed east of the harbor at Ballycotten, and by 10am the IRA had the weapons. The following quotation is an account of the conclusion of the operation from the witness statement of Commander O’Donovan:

The hatches were now opened up, and three gangs operated in a chain from the hatches to the lorries, loading about one thousand rifles, one thousand Webley revolvers (45), one thousand Webley& Scott 55 pistols, one hundred thousand rounds of 303 ammunition some thousand rounds of revolver ammunition, a large stock of hand and rifle grenades, fifty Lewis guns, six Maxim guns and a large number of mines. Each lorry, as loaded, was despatched (sic) to a different’ portion of the brigade area the last one being despatched at 10 a.m. All transport reached its destination safely, and so the operation was successfully concluded.

The massive weapons hijack is an important story of the revolutionary years, and it is very likely that Dan Manley was part of the shore crew removing the arms.

In 1924, the Military Service Pensions Act was passed by the Dáil entitling pensions for those who had served in a named military revolutionary organization between 1916 and 1924. Dan qualified and received a pension for the rest of his life for his service to the cause of Irish independence. Dan remained a DeValera man during the Civil War and throughout his life. After the war years, he maintained steady employment working for the City of Cork. When he died at age 75, Dan had a full military funeral with a military march behind his casket and a 6 gun salute at the grave side.

Brian’s mother, Annie Fitzgibbon was born in Newcastle, Co. Limerick, also to a nationalist family. Annie moved to Cork City in 1920 at age 18, a year after her brother Paddy. Annie found work as a domestic in the wealthy Montenotte area of the city working for the protestant Knox family, managers of the Ulster Bank. Paddy and his good friend Aeneas O’Connor came to the city, Brian speculates, to become part of the IRA campaign during the War of Independence. Brian remembers his mother telling him a harrowing story of walking down a street in Cork during the war and seeing her brother and Aeneas approaching her. The meeting was purely a coincidence. As they passed, Paddy used a handshake to pass along something to Annie, and the two parties continued walking their separate ways. Not knowing what her brother handed her, Annie pocketed the small bundle. Minutes later Paddy was stopped by the Black and Tans, searched, and then allowed to walk on. When Annie returned to her room, she discovered her brother had handed her a grenade. Brian says his uncle and Aeneas would have been pinned against the wall and shot on the spot if the grenade was found on Paddy. Paddy and Aeneas were great supporters of Michael Collins, and, after the treaty, were among the first men in Cork to join the Free State army in 1922. Both men were stationed at Collin’s Barracks in Cork, and Paddy and his brother-in-law, Dan, remained aloof with each other for the rest of their lives because one sided with Dev and the other with Collins. Aeneas lived next door to the Manleys for decades, and Dan and Aeneas didn’t speak for twenty years – such was the divide that permeated Irish society after the Civil War. Indeed, membership in one of the two political parties, Fine Gael and Fianna Fáil, is still an indicator of the side one’s family took in the Civil War. Paddy made a career in the army and retired to work for the new Shannon Airport when it opened for international flights in 1945.

Brian left school at 13 and found odd jobs delivering vegetables until he took a job in a hosiery factory at 16 and the British Ford Motor Company at 18. He also began to court Kathleen Burke. The plant closed in 1953, and when Brian could not find steady work, the couple decided to immigrate to the US. They were married on July 21, 1956 and sailed out of Cobh harbor the same day for Hoboken, New Jersey. Their ship crossed the Atlantic in the wake of the Andrea Doria, the Italian liner which sank in Nantucket Harbor after a collision with another ship.

Brain and Kathleen settled in Feura Bush for a couple of years and both found jobs at the old John G. Myers Department Store on North Pearl St. in Albany. After a brief move to Poughkeepsie in 1961, they returned to Albany in 1966 where they raised their four children and became active in the Albany AOH. Brian remembers a time when he’d walk into the hall, and two deep at the bar would all be from Ireland.